United Airlines in October was the first domestic carrier to test a digital health pass for international travelers just as the race to vaccinate Americans against COVID-19 was heating up.

The world’s No. 2 airline then took the odd step of allowing four major competitors to roll out similar smart phone-based applications before launching its Travel Ready Center, a platform that allows passengers to post, verify and display COVID-19 test documents.

The 14-week hesitation by United, which fashions itself as the industry leader in COVID-19 travel safety innovations, illustrates the airline’s concern about nudging customers toward a politically tricky two-tier system for the vaccinated and unvaccinated.

Robert Einhorn, a United spokesman, declined comment about any unintended effects. “We have nothing further to add,” he said, referring to a February news release announcing the airline’s Travel Ready Center, which allows travelers to review domestic and international travel requirements and upload personal COVID19 data.

Rutgers University Business School Professor Wayne Eastman said pressure to broaden the use of digital health passes would intensify as companies market secure digital wallets that could develop into a universal standard for people to store proof of their COVID-19 status and quickly produce it.

“It is understandable they would want to set up some kind of system, but, when you do that, you create real concerns about a two-tier system in which some people are locked out,” Eastman said.

Digital health passports are potentially intrusive. They also create a divide between front-line workers, those with preexisting medical conditions and older Americans who are receiving vaccines and millennials who may not qualify until later this year when supplies and access to shots expand. More disturbing, though, is the fact that digital passports represent another barrier for the poor and people of color who lag nationwide in vaccinations against COVID-19.

Despite the misgivings, others view health passes as a fast-track back to normalcy, particularly in industries such as airlines that have been hamstrung the past year.

“I talk to frequent travelers, both business and leisure travelers, every day, and there really is no consensus,” he said. “Some really feel we should be doing domestic testing.” Other travelers, he said, even favor limiting travel across state lines without a COVID-19 test or vaccination.

United, like other domestic carriers, posts regulations required by each state where it flies. All international travelers, per U.S. law, must produce proof of a negative COVID-19 test or documentation of recovery. For many destinations, proof of vaccination will not be enough.

“The real barrier is going to be who has the $100 for a test. You still have to show a negative test even if you’ve had the vaccine,” said Elliott, explaining there isn’t enough capacity to test every passenger, especially during the upcoming summer vacation season.

“That’s going to price people out of the travel industry and that’s what the airlines want to avoid,” he said.

United’s health platform is similar to one it initially tested, CommonPass, technology developed by the Commons Project Foundation and the World Economic Forum. It informs international travelers of measures required at their destinations and allows them to make appointments online at 15,000 test sites around the world. Passengers can upload their COVID-19 test results and United staff verifies them before check in.

The International Air Transport Association (IATA), whose 290 members represent 85% of global air travel, is marketing a similar digital health pass system to facilitate international travel. Most countries around the world require a mandatory negative COVID-19 test result for all incoming passengers, taken no more than 72 hours before departure.

United opposes COVID-19 testing for domestic air travelers. The airline is a member of IATA, which flatly opposes mandatory COVID-19 vaccination for travelers.

“We don’t support making vaccination a condition of air travel,” said IATA spokesman Perry Flint, who said travel has still not returned even to half its pre-pandemic level. “Governments will make decisions and we’ll have to work within them.”

Some travel companies already demand proof of vaccination before making travel reservations, such as Saga Cruises, a United Kingdom company, which is at the leading edge of the emerging trend. Qantas, an Australian airline, also announced that all passengers later this year must prove they are vaccinated against COVID-19 before they board flights.

Health passes are not new. The Yellow Card, or Carte Jaune, issued by the World Health Organization in 2005, is an official record that some countries require for entrance. It documents vaccinations against diseases ranging from cholera to yellow fever.

The digital passports are simply an electronic version of the old standard card stock.

George E. Jordan writes a weekly column on business and development in New Jersey. He may be reached at george@griotmediaworks.com 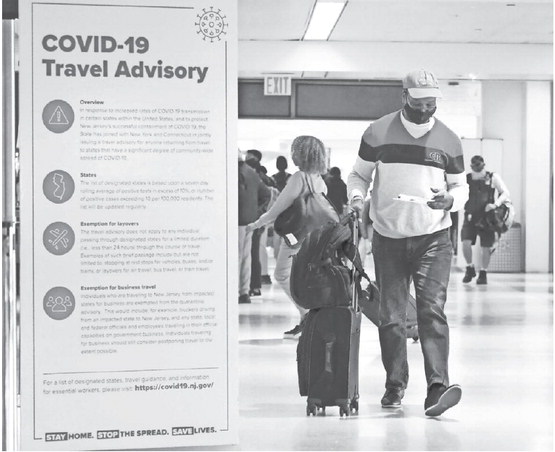 Should air travelers be made to show digital COVID-19 testing and vaccination documents? Patti Sapone, for The Star-Ledger

Click here to see this page in the eEdition: